Could That Empty Desk Be Your New Competitive Advantage? 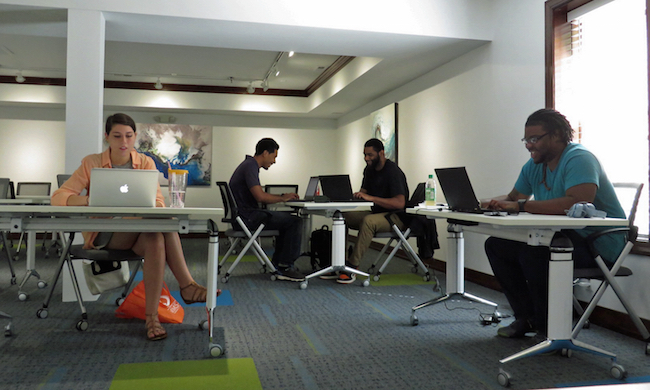 If someone proved that you were actually using less than 50% of your office space, what would you do with the empty excess? Well, that next lease could be a LOT smaller, but that might not be an option right now. So, what if you could publish that empty, excess capacity to your customers, partners, prospects, prospective talent, or even to the public and generate revenue from it?

What if you could “Airbnb your office space?”

Airbnb allows us to generate revenue from our empty homes, and Uber allows people to generate revenue from the 92% average “emptiness” of our cars. The exciting news is that your business can now participate in the Sharing Economy. Imagine inviting those with whom you do business into your space, and watching the magic that happens when you collaborate more closely. It’s not hard to imagine the possibilities if you’re a creative, forward-thinking CEO.

What if, as a result of operating your space as a shared resource, your employees became more engaged, productivity increased, and you were doing something beneficial for the environment? All good stuff, right?

This ideal working environment is within our grasp, says Virginia Council of CEOs member, John Vivadelli, President and CEO of AgilQuest.

Look around. How many desks and rooms are going unused in your office space? Like it or not, you’re paying for that space. AgilQuest has been measuring business space inefficiency for over 20 years and has uncovered some remarkable figures.

“In the mid-90’s when I started AgilQuest, it was very common to see companies actually using 50% of their space effectively,” says Vivadelli. “Now we’re seeing office spaces and buildings that are 60 to 70 percent vacant. A lot of it has to do with the impact of technology, freeing people to be more mobile and giving them more choices about where and when to go to work. More often than not, work is now done outside of the traditional office, leaving desks and conference rooms empty,” says Vivadelli.

Another reason there’s empty desks? Many small businesses get trapped into long term leases with large amounts of “just in case” space, as in just in case we grow. You’re only using 30 to 40% of your space now, do you think that percentage is going to go up over time? (Cue more empty desks and conference rooms.)

“The future of the workplace should be centered around choice, sharing and monetization,” says Vivadelli. “To take advantage of this concept, measure your office’s efficiency, share and optimize its use, and then either divest of the excess or publish it to others.”

He has the numbers to back up his assertion. One AgilQuest client, located in New York City, shares space at an average of 3 people-to-desk ratio, allowing them to cut its square footage in half resulting in savings of about $100 million a year in real estate expenses. Another client – a government agency – downsized its real estate holdings, converted to a 2-1 worker-to-workspace ratio, and saved more than $24 million.

For CEOs locked into a large space with a hefty lease, the time is right to monetize it, Vivadelli tells us. Share your space, just like people share cars and houses. A win-win for everyone –for those who want to save money, and employees with increasing demands for flexible space.

“Who would’ve thought four years ago that a company would essentially legitimize hitchhiking?” asks Vivadelli. “Think about it: Uber is now a $69 billion company. And who would’ve thought you would share your bed or home with strangers? That’s called Airbnb, and that company is more valuable than any hotel chain. If I’m willing to share my car or my bed, sharing a desk is not as far out there as it used to be.”

“Giving people a choice of where and when to go to work drives engagement,” Vivadelli explains. “Engagement drives productivity. Productivity drives revenue. What our products and services do is give people a choice.”

When your value proposition is about space efficiency, what’s does your space look like? The AgilQuest space is just what you would expect. Rooms are available for anyone inside or outside the company to reserve, and the entire bottom floor of the building is set up to demonstrate how a flexible environment can function.

Everything can be easily moved, and there’s small rooms for huddles, a nice kitchen, and an attractive outdoor space. It’s a place to work during the day; a great event space on the weekend.

“Wouldn’t it be interesting if we could break down the barriers – the real estate walls we work within – and see if we can get our organizations to interact much more freely with each other,” asks Vivadelli. “And by doing so, instead of thinking of real estate as a cost to be minimized, or a place to stick people in, look at real estate as an asset that can be monetized and used to generate revenue?”

*This article was originally published by the Virginia Council of CEO’s.